“Don’t Make Assumptions. Find the courage to ask questions and to express what you really want. Communicate with others as clearly as you can to avoid misunderstandings, sadness and drama. With just this one agreement, you can completely transform your life.”   ~Don Miguel Ruiz 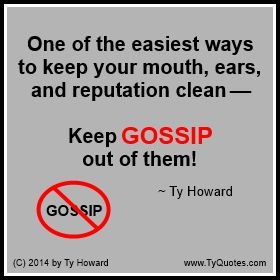 The other day I had another staff come to me in private about another coworker creating drama at work within their small circle.  As I listened, I totally could relate to his concerns and frustration.  There’s no faster conflict and heated hate among others when others talk about someone in negative discord and without having a positive outcome – just SMACK talk for the need of gossipy entertainment.  And although it always feels good to have people come to you in confidential trust, I later prayed about what I was told, because I too, have fallen into ugly gossip and know the hurt and painful damage that can take place.

The following article discusses six ways we can become better coworkers and avoid the office drama:

Trash-talking friends, free-flowing gossip, popularity contests, and exclusive cliques. Sound like high school? Probably. But the better (and much scarier) question is—does it sound like your office ?

You might assume now that you’ve entered the professional, mature workforce, you’d be able to escape the petty drama reminiscent of high school. In reality, offices can be just as drama-filled as your high school homeroom.

All of a sudden, you find yourself the subject of co-workers who talk behind your back , try to recruit you to take sides in an argument, or help make someone look good—but only at the expense of someone else. And if you’re not careful, it’s easy to get roped into those destructive activities yourself.

But, as I’m sure you remember from your school days, drama rarely benefits anyone. It’s certainly not going to help you get ahead at work, land any promotions, or negotiate any raises .

Stay on track to a successful career by following these six rules for keeping your work life drama-free.

We’re all mature, professional adults here, right? Yet, it’s easy to catch yourself doing things that are more worthy of high school hallways than the office.

For example, maybe you’re not getting along with a certain co-worker, so you give her the cold shoulder—walking past her desk and passing her in the break room without a glance her way, let alone a greeting.

You can immediately recognize this behavior as immature and inappropriate in a work setting—and it will only serve to incite more drama once the co-worker in question (and everyone else on your team) takes notice.

Leave the angsty behavior behind and focus on interacting with your co-workers and dealing with any issues in a mature, professional way .

Rule #2: Save the Venting for Outside the Office

It’s probably the most obvious rule of them all: Resist the urge to talk about your co-workers and boss while you’re in the office. And yet, most people do it anyway.

It’s common office chatter: “Did you hear what Brian said in the meeting this morning?” “I can’t believe Lisa thought this report was good.” “I heard that Megan partied a little too hard with a client last weekend at the conference.”

Yet, that seemingly harmless chatter immediately turns offensive when the person in question happens to walk by your cubicle while you’re mid-sentence—or when word inevitably gets around that you’re talking about that colleague.

And don’t think that closing your office door keeps you out of the fray. That sense of security can lead to raised, frustrated voices—which can often carry through office walls.

You’ve heard it before, but everyone could use a reminder: Save the venting for when you’re away from the office and well out of earshot of anyone who works at your company. You’ll spare everyone the drama.

Rule #3: When in Doubt, Wait to Reply

There aren’t many things that can get your blood boiling as quickly as an email that seems to attack you, your team, or your work.

So when you do, you immediately fire off a scorching reply, contesting every point made in the email—and CCing a few key higher-ups to make your point crystal clear. Suddenly, everyone’s chiming in and taking sides on what’s now an emergency situation.

Or, you resort to the more passive-aggressive approach, beginning your email with, “I could be wrong, but maybe my team wouldn’t have missed our deadline if the product managers had provided the research on time.”

Either way, you’re encouraging drama. So if you find yourself beginning an email reply in a frustrated frenzy , stop and walk away from the keyboard. Let the email simmer for a while before you respond. Logically think through what you want to say—and more importantly, how to say it in a calm, diplomatic way.

Often, if you come back to the email 15 or 30 minutes later, you’ll find that you can think much more clearly—and avoid a whole lot of drama in the process.

Along the same lines, to avoid unnecessary drama, you have to realize the point at which it’s better to simply talk to your co-worker in person or on the phone, rather than engage in a heated email battle .

It doesn’t look good on anyone to foster an angry email chain, adding bosses and managers along the way, until it’s developed into a full-fledged battle.

If you sense frustration, anger, or accusation in an email, and it likely can’t be resolved with one simple email reply, resolve to talk it out. You’ll find that verbal communication leaves less room for misinterpretation and is often a better vehicle for resolving problems while leaving feelings intact.

Even if no action of your own fuels drama, you can get caught it in anyway: A co-worker comes to you to complain about a teammate, you receive an email asking your opinion about a sensitive workplace debate that doesn’t concern you, or someone starts revealing all-too-personal details of your manager’s love life.

To avoid getting roped in, come to the office prepared with a go-to escape phrase—a polite but firm way to see yourself from a conversation that isn’t going anywhere productive.

Career coach Lea McLeod suggests expressing helplessness : “When a co-worker starts spinning the gossip yarn (“I heard the boss knows that Sam’s looking for a new job—what do you think he’s going to do?”), shrug and say ‘I can’t help you with that one. Sorry.’”

Other escape phrases could include “I’m sorry, I’m on a tight deadline and I need to get back to work,” or “I’m not feeling very chatty right now.” Whatever you feel most comfortable with, have it at the ready—and use it.

If you’re looking for drama, you’re going to find it.

What do I mean? Let’s say someone on your team sends you an email that says “Hey Katie, I think we may need to change the approach to our marketing campaign.”

If you’re reading it under the assumption that everyone on your team is working together toward one, unified goal, you could see this as arespectful, helpful suggestion .

If, on the other hand, you’re assuming everyone wants to knock you down on their way to the top , you could interpret it as a condescending attack on all the work your team has put into the campaign so far—and an assertion that the sender clearly thinks he or she is better than you.

It’s pretty apparent that of the two options, the second is much more likely to contribute to a drama-filled workplace.

To avoid that drama, simply work under the assumption that your co-workers and managers are there to help you, support you, and challenge you to produce even better work.

When you follow these rules, we’ll avoid creating and adding to workplace drama. And a workplace without drama is one that is efficient, productive, and perhaps most importantly, enjoyable~

“Don’t waste time on what’s not important. Don’t get sucked into the drama. Get on with it: don’t dwell on the past. Be a big person; be generous of spirit; be the person you’d admire.”  ~Allegra Huston